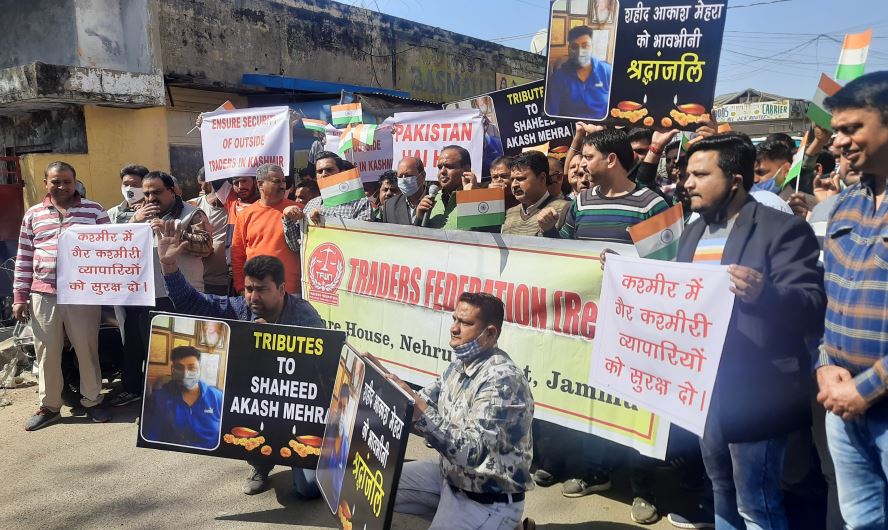 Jammu: In current days, merchants in Jammu have rallied in opposition to the conspiracy to focus on enterprise institutions and merchants on behalf of terrorists within the Kashmir Valley. The merchants of Jammu have demanded from the federal government that the tax paid by them ought to be spent on the security of the merchants in Kashmir.

In current instances, terrorists in Kashmir have focused non-Kashmiri merchants who’ve been doing enterprise there for many years. Akash Mehra, the son of the proprietor of the dhaba, died in the same assault on Krishna Dhaba in Dal Gate space of ​​Kashmir. In Jammu, merchants of the most important grain market within the state took to the streets to focus on merchants in Kashmir.

On Wednesday, below the banner of Warehouse Merchants Federation, merchants of the most important grain market of the state, took to the streets and shouted slogans in opposition to Pakistan. Federation’s secretary Deepak Gupta alleged that the merchants of Jammu and Kashmir are giving crores of rupees tax to the federal government and the federal government is imposing this tax within the safety of the leaders who’re spreading separatism there.

The federation stated that the safety of non-Kashmiri merchants, who’ve been doing enterprise for many years, shouldn’t be being taken care of by the federal government. Deepak Gupta alleged that businessmen of Kashmir and merchants of Jammu are depending on one another and up to date occasions have created an environment of worry and worry within the minds of each the merchants. These merchants have demanded that the security of non-Kashmiri merchants working in Kashmir be ensured.

West Bengal Elections 2021: Congress-Left and ISF alliance method mounted, know who will contest elections on what number of seats